VANCOUVER, BC – Bob Lenarduzzi remembers asking a 15-year-old Russell Teibert where he wanted to play when he grew up, expecting to hear him answer with one of the European giants.

Teibert’s answer: “I want to play for the Vancouver Whitecaps.”

Suffice to say, that was music to Lenarduzzi’s ears.

It’s long been a goal for Lenarduzzi and the ‘Caps to develop Canadian players – not only for the Whitecaps FC first team, but also for the Canadian national program.

That was the goal back in 1997 when Lenarduzzi left his post as head coach of the Canadian senior men’s national team and started working with Bart Choufour, who was the first director of the Vancouver 86ers youth development program (fittingly, Choufour was announced on Monday as the club’s full-time Pre-Residency and Academy Centres director and head coach).

It was the goal in 2007 when Whitecaps FC launched its fully-funded Residency program, the first of its kind in North America.

And with head coach Carl Robinson in charge, it remains the goal today.

“From the time we joined MLS and previous to, we always viewed ourselves as a club that wanted to develop players,” Lenarduzzi told whitecapsfc.com. “The thought was always there. We want to develop those players for the Whitecaps, but at the same time we’d like nothing better than to help get Canada back to the World Cup.”

“We'd like nothing better than to help get Canada back to the World Cup.” - Lenarduzzi

“If we’re still doing our job properly,” Lenarduzzi continued, “then there should be a significant number of players coming through the Residency program that actually help Canada qualify for the 2022 World Cup.”

Since its creation in 2007-08, the club’s Residency program has produced upwards of 100 players for Canada’s senior and youth national teams and 11 players who have broken into Whitecaps FC’s MLS side.

That includes seven Residency graduates on their current first-team roster as well as a league-high eight Homegrown players.

It’s been a year since a number of those players made their professional debuts with the Blue and White in the 2014 Amway Canadian Championship. And some of them could be involved again on Wednesday when Whitecaps FC open the 2015 edition of the tournament against FC Edmonton.

When you’re talking about Residency graduates who have made it, Teibert is very much the headliner. The Niagara Falls, Ontario native, who captained the team during last year’s Canadian Championship, has been with Whitecaps FC from the start of the MLS era – and well before that.

In fact, Teibert is the longest-serving member of the club after joining the Residency program back in 2007. He was 15 years old.

“I knew it was going to be an adjustment living in a new city with a new school and new friends, living with a new family …  but the decision was simple,” Teibert told whitecapsfc.com. “No other professional team in Canada had a Residency program where I could go to school full time, play soccer full time, and chase my dream to become a professional soccer player. So I did what it took to become a professional soccer player and I owe a lot to the Whitecaps for giving me that opportunity.”

Teibert was part of a group of five or six Ontario-based players that then-Residency director Thomas Niendorf brought in on trial. The ‘Caps had space on their roster for three of them.

“We picked two and then we were looking for a last one,” said WFC2 assistant coach Steve Meadley, who has been working with the Residency program since the start of its existence. “I remember the last part of that session Thomas saying to me, ‘Stevie we need one more.’ So we ran a bit of a shooting and finishing exercise. After that, Thomas came over to me and said, ‘Who do you think?’ I said it has to be the little left-footer. He had been filling the net all afternoon. And it sort of just blossomed from there.”

Within a week, Teibert was training with the Residency team. And just a few years later, he became the 10th youngest player to appear in a professional match with the ‘Caps – a 2-2 draw with Carolina RailHawks in July 2010.

In those initial years, Teibert was actually living in Meadley’s basement – along with Philippe Davies, a Residency graduate currently playing professionally with Ottawa Fury FC.

“There’s a story I like to tell about them,” Meadley said. “I still remember today, I’d go downstairs and say hi to them. You go into Russell’s room and it was like some boutique department store, everything was folded and put away neatly, boots all lined up. Go into Philippe’s room and it was like a bomb had gone off. It was kind of a neat perspective. Certainly both of them were part of our family.”

The goal is to provide Residency players everything they need to be successful – on and off the pitch. From accommodation through the Whitecaps FC Billet Program to nutritional planning to full-time education, offered through the Burnaby Secondary elite athlete program, there is no stone unturned.

“All I had to worry about was going to school, taking care of my grades, and taking care of business on the field,” said Teibert, who has 12 caps with the Canadian senior men's national team. “But what I learned being in the Residency program is that … it doesn’t just happen. You don’t wake up one morning and become a pro soccer player. It takes hours and hours of hard work, time, and dedication. These are things I’ve had in me from a young age but the Residency program nurtured my talent, if you want to call it talent, and developed me into the player I am today.”

The Residency program is only one part of Whitecaps FC’s development pathway.

For players in the U-13 to U-15 range, there’s the Pre-Residency program, which has now expanded into a full-time school program as well. There are also Academy Centres established across British Columbia and in Saskatchewan (each is run by experienced head coaches, some from the university level and others with UEFA A and B licenses from their time in Europe), with the goal of increasing the level of soccer throughout the region.

A recent addition to the pathway is Whitecaps FC 2, the club’s new United Soccer League side that serves as a bridge between the Residency program and MLS side.

“This USL team is the final step to the big leagues for them,” Meadley said. “For me, the pathway is now clear. It’s unobstructed. They don’t need to go anywhere else. The club can look after these kids all the way through.” 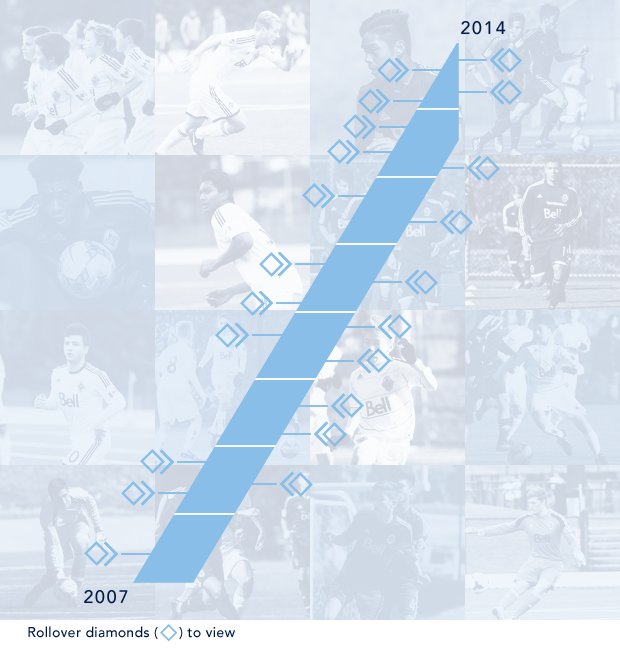 Residency graduates who have debuted with the first team (current roster):

Topics:
Academy
Club
Men
Previous
Next
Become a 'Caps Insider
Subscribe to our newsletter and get the inside scoop on the latest club news, match info and special offers.
You agree to privacy policy and to receive emails from Vancouver Whitecaps FC. You may unsubscribe at any time.